Movement Mortgage opened its headquarters in Indian Land in January 2016 and has grown to over 800 employees. A second building is under construction that will bring total employment at the campus to 1,300. Movement Mortgage has been recognized by Inc. Magazine as the nation’s fastest growing mortgage company. Movement Mortgage CEO Casey Crawford commenting on the award said, “Relationships are crucial to any level of success, and we have been truly blessed by the personal and professional relationships we’ve developed since planting and growing our headquarters in Indian Land. South Carolina and Lancaster County have been terrific partners in helping us live into our mission to love and value people by leading a movement of change in our industry, corporate cultures and communities.”

PCI Group, which provides time sensitive document printing and delivery, has experienced strong growth the last several years. Since 2015, the Indian Land based company has added 193 new jobs and invested over $10 million at the facility. “In 2008, we made a strategic decision to relocate our business to Indian Land.  It was a decision that proved to be vital to the success of our company.  The Lancaster County Council and Lancaster County Department of Economic Development have been extremely supportive of us and we feel very fortunate to operate our company in such a thriving business community”, said PCI Group Executive Vice President, Skip Pawul. He added, “We have worked hard to build our business and are honored to have been nominated by LCDED and recognized by the State of South Carolina, with this award.  We also want to extend our congratulations to the other outstanding companies that have been recognized for their success.”  In 2017, LCDED named PCI Lancaster County’s Medium Size Industry of the Year.

Fab Fours, located in Lancaster, is a manufacturer of specialty bumpers for trucks and jeeps. The company is undergoing a major expansion of its operations. The expansion, announced in December 2017, will result in Fab Fours investing $5.7 million in their facility and increase their employment from 100 to 160 over the next three years. Greg Higgs, President of Fab Fours spoke on the award, “Fab Fours is honored to accept the South Carolina industry impact award.  As the aftermarket truck parts fastest growing brand, we have been experiencing 25% annual growth for a decade.  Remarkable testament to our great team, as we are 100% manufactured in-house!  We take tremendous pride in our manufacturing facility as well as our home grown work force that pushes the boundaries of lean manufacturing every single day.  Managing our growth year over year and developing the technology and workforce to compete nationally is a huge ask!  As such we appreciate the recognition from our home state and South Carolina’s continued support of our ongoing adventure.  We are primed to double again in the next 2 years, and are looking forward to every bit of it!”

LCDED Director Jamie Gilbert said, “It’s a golden day in Lancaster County and our businesses taking home all three awards for the tier two counties shows what businesses of all types and sizes can achieve here. Our winners represent a diverse cross section of businesses and that’s very important to maintaining a healthy local economy. There are some amazing companies among the state’s tier two counties, so for Lancaster County to sweep the awards is an incredible accomplishment but it’s not surprising.  In Lancaster County we know about the phenomenal businesses that call us home but with these awards the rest of the state now knows it.” LCDED has worked extensively with Movement, PCI and Fab Fours on their expansions and other projects like our video profiles. “We know firsthand the impact they make in our community and are very appreciative of it. We congratulate them on winning the awards”, said Gilbert.

The South Carolina Department of Commerce, which coordinates the awards, asked economic development organizations from across the state to nominate one businesses in their community for each of the size categories. The selection process is highly competitive as only three winners are chosen for each of the state’s four tiers for a total of twelve winners statewide. Tiers are annually determined for each county by the South Carolina Department of Revenue and reflect a county’s overall economic health. Lancaster County’s nominated companies competed for the awards with other tier two county businesses in Anderson, Dorchester, Florence, Georgetown, Greenwood, Kershaw, Oconee, Pickens, Saluda and Sumter Counties.

In 2017, LCDED developed a prescreening and nomination process for its award submittals. The process led to Nutramax Laboratories winning the 2017 Large Industry of the Year award among tier three counties. LCDED’s nomination process has received strong praise from the South Carolina Department of Commerce. Chuck Bundy, who coordinates the awards for the South Carolina Department of Commerce says, “LCDED does an excellent job with its submittals and making the case for their businesses. We appreciate the effort they put into it.”

With the success at the 2018 South Carolina Industry Impact Awards, LCDED will have to wait three years before they can nominate one of the county’s businesses for the awards, unless the county is moved to a different tier. “We have so many fantastic companies we would like to nominate in the future for the awards so we hate having to wait. The good news is that we will continue to recognize our businesses at the local level each year so there will be opportunities for them to get the recognition they’ve earned”, Gilbert said. 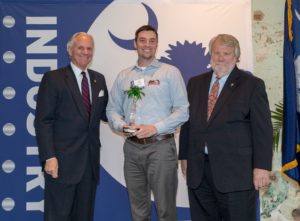 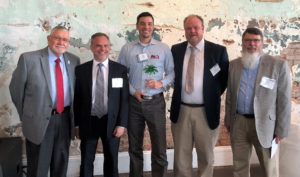 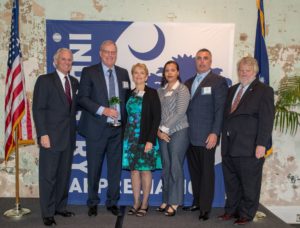 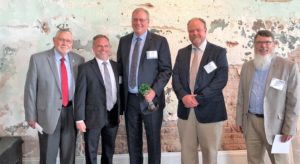 PCI with LCDED and County Council 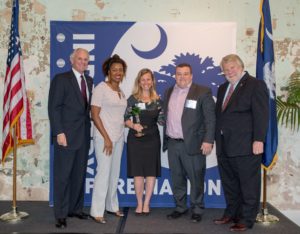 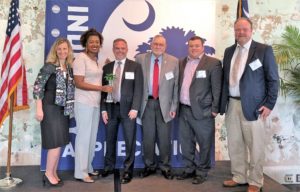 Movement Mortgage with LCDED and Council 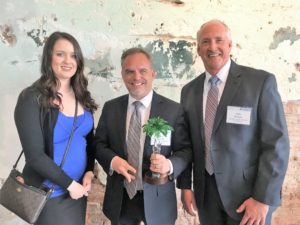