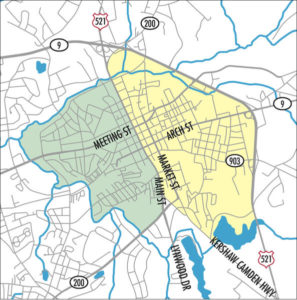 Gov. Henry McMaster on Friday picked Lancaster as one of 135 sites across the state that will become “opportunity zones,” part of a new federal program designed to create jobs in economically distressed areas.
McMaster submitted his list to the U.S. Treasury Department, which is expected to approve the sites in the next 30 days. The program makes those areas eligible for tax incentives to encourage business creation and the development of affordable housing.
“It’s a great step forward, and there will be more,” McMaster said at a press conference in Ridgeway. “It’s not the end, but another new beginning for South Carolina.”
Lancaster is divided into two of the opportunity zones, each of which encompasses one U.S. Census tract. The two zones include all the area inside the Lancaster city limits and a little land outside the city.
One zone stretches from the east side of Main Street to S.C. 9 Bypass. The other is from the west side of Main past Springs Memorial Hospital. The northern boundary is S.C. 200 just past the city limits, and the south boundary is near the Lancaster County Water and Sewer District reservoir.
The opportunity-zone idea was spearheaded in 2016 by Sen. Tim Scott (R-S.C.). It eventually became part of the Tax Cuts and Jobs Act of 2017, which Congress passed and President Trump signed into law in December.
The law opens the door for private investment in economically distressed communities nationwide. It offers companies or private investors a deferral of capital-gains taxes for up to seven years in exchange for reinvesting those dollars inside an opportunity zone.
S.C. Commerce Secretary Bobby Hitt said the money can be spent on industrial projects, retail businesses, affordable housing or professional services such as medical offices.
“And the longer they leave the investment there, the better tax benefit they get,” Hitt said.

Site selection
Hitt said the sites were prioritized based on an analysis of economic data for each census tract.
“We wanted to look at the tracts where we would have the best opportunity to have success, not just fan ’em out or hand ’em out,” Hitt said. “Winning in economic development is about two areas – being lucky and being ready. And this makes us ready.”
South Carolina has 1,097 census tracts, and 538 have been designated by Treasury Department as eligible for the opportunity zone status. Each state can select 25 percent of eligible communities for the program, which led at a list of 135 zones in South Carolina.
Each of the state’s 46 counties has at least one of the 135 proposed opportunity zones.
Lancaster County had nine eligible tracts and applied to get three included, said county Economic Development Director Jamie Gilbert.
Census Tracts 107 and 108, which include all of downtown Lancaster and the surrounding area, were selected. Gilbert said Census Tract 102 (Kershaw) was not, though it was listed as the county’s top priority.
County officials, he said, were disappointed with that decision “but will continue to work hard to bring new development to Kershaw.”
Gilbert believes the opportunity zone program, when combined with a concerted effort by the city of Lancaster, Lancaster County and the private sector, “can bring new life to the Lancaster area.”
Rep. Ralph Norman, who was at McMaster’s press conference, said once the program is coupled with President Trump’s initiatives to deregulate business, it will kick-start business across the 5th Congressional District.
“From Cherokee to Fairfield to Sumter, he (McMaster) made sure that each county has the potential to grow economically, and provides an opportunity for great investment in these counties,” said Norman.
Norman’s 5th District has been especially hard hit by job losses such as the July 2017 cancellation of the multibillion-dollar V.C. Summer nuclear project in Fairfield County. That led to the sudden loss of more than 5,000 jobs without warning.
In Lancaster, battery maker Duracell is eliminating 430 jobs as it shuts down its S.C. 9 Bypass West plant to consolidate production of AA and AAA batteries at a single plant in LaGrange, Ga.

Scott initative
Sen. Scott was not at Friday’s announcement due to Thursday’s late-night Senate vote on a $1.3 trillion spending bill that Trump signed Friday.
Scott told the Charleston Post & Courier that McMaster’s announcement was “exciting news” for the state.
“This means tens of thousands of folks across every one of our counties will see a brighter future due to a stronger local economy, a surge in job growth, and the potential revitalization of entire neighborhoods,” Scott said.
The opportunity zones idea was never debated on the Senate floor or promoted by the White House.
But Kevin Hassett, the chairman Trump’s Council of Economic Advisers, said in a January interview with the New York Times that it could help many struggling small towns and rural areas.
“If it’s successful, we’ll look back 10 years from now and say this was one of the most important parts of the tax bill, and one we didn’t talk nearly enough about,” Hassett said.